I’m on a Boat! (and how my fitness played out)

I’m on a Boat! (and how my fitness played out)

This post has advanced fitness tips for travelling in unique conditions.

This is the 35 foot vessel that was my home for 10 days in July 2014. She would range far south, from her habour-mouth, and rejoice in every wave. Then race north into Michigan, and be taken home again. 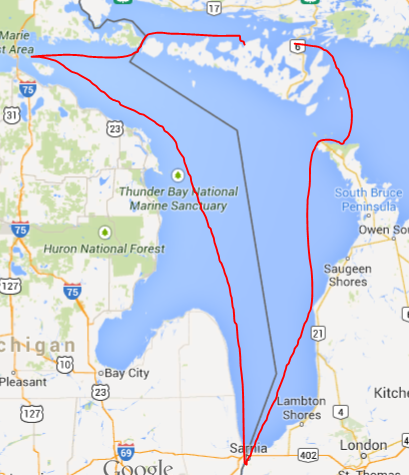 Before the trip, I had two things on my mind: the exhilaration of the inland seas we call Great Lakes, and my above-average body composition (and how would it stay that way, on such a long vacation, accompanied by drunken sailors).

Spoiler alert, I got leaner on this trip! I was shocked.

What I ate (I usually avoid most of this stuff)

I think sometimes people fail at nutrition because they don’t believe in the little victories. My compliance to my supplements on my trip was near 100% and maybe that was the proverbial straw that didn’t break my back.

Meal replacement when it was too rough to eat. I later threw all this up but the crew was ok.

In my defense, we were in eight-foot swells hitting us diagonally, and I had to be below deck making food.

Booze – The Official Supplement of Sailing

After engine failure and drifting around the St. Clair river, we were towed safely in a shipping lane and did what we had to do to improve morale.

I guess the bottom line here is that I chose a vacation that was activity intensive, and I used my appetite and nutrition knowledge to eat slightly less than I needed to. And that’s how I was leaner when I got back.

At the gym after my trip, I noted how habitual it was to be there, enduring another punishing workout. I thought about how few people exercise. I thought about my clients and my concern for their success.

I realized my concern for the uninitiated, or the rookie client, is not that they gain a few pounds on vacation, it’s that their habits break completely because of the vacation.

I wondered if maybe we all need to lighten up on our vacations? Or is that the wrong message to send? I don’t know. I suppose everyone is different.

I can help you figure this out and how it will impact your goals.

Sorry, the comment form is closed at this time.